Champions of Faith and Freedom 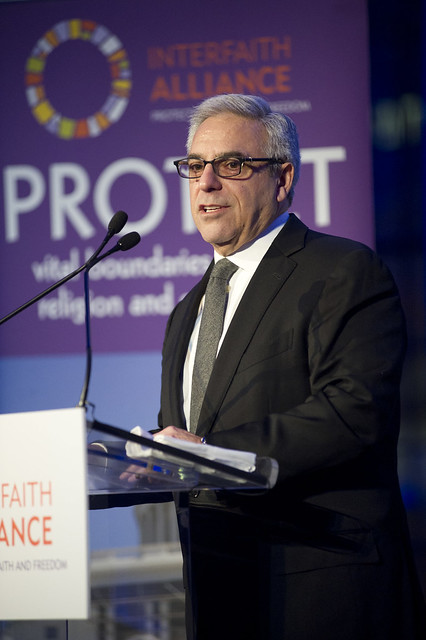 Mitchell Gold accepts the President’s Award for Defending Democracy & Freedom. Mitchell Gold has been tireless in his support and encouragement of the mission of Interfaith Alliance. His devotion to the work of justice for all within and outside his industry — especially for the LGBT community — is unmatched and directly resulted in his founding of Faith in America, an organization that addresses religion-based bigotry. He is also the esteemed co-founder of Mitchell Gold + Bob Williams, one of the most respected names in the furniture industry.

Rev. Dr. C. Welton Gaddy accepts the 2012 Interfaith Alliance Walter Cronkite Faith and Freedom Award. Welton Gaddy has led Interfaith Alliance for 15 years and in that time has established himself and the organization as a leading voice committed to defending religious freedom and to protecting the boundaries between religion and government. Spanning a career in ministry and public service that has lasted over 50 years, he challenges those who seek to impose a narrow religious view on the rest of us. At the same time, he fights to protect the free practice of religion as guaranteed by the U.S. Constitution.

As Rev. Gaddy would say, until next time, “you all take care of each other.”

Sign up to receive information about the Walter Cronkite Faith & Freedom Award Gala, and other updates from Interfaith Alliance.